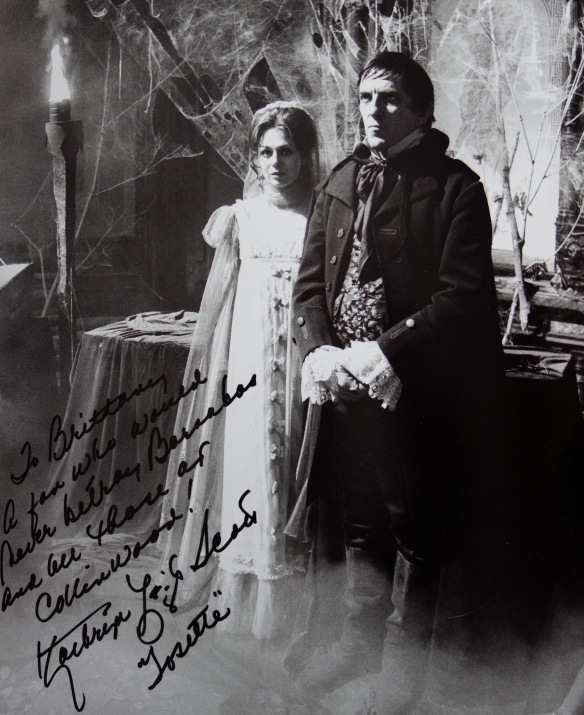 (Thank you, Molly, for helping her less artistic, more autistic sister transfer this beautiful image to her computer! She has a blog, too.)

This is the totally coolest thing ever. It’s a promotional still of Kathryn Leigh Scott (Maggie Evans/Josette du Pres) and Jonathan Frid (Barnabas Collins) for House of Dark Shadows, with the following inscription: “To Brittany, a fan who would never betray Barnabas and all those at Collinwood. — Kathryn Leigh Scott ‘Josette'”

(Remember when Barnabas viciously beat Willie with his cane, screaming, “You betrayed me, Willie!” I would never do that. Betray Barnabas? No. Freaking. Way. Beating Willie, especially when played by Jim Fyfe, is another thing.)

Yeah, I requested that she write that. But still. I think it’s really cool.

To coincide with the twentieth anniversary of Dark Shadows in 1986, Kathryn Leigh Scott wrote My Scrapbook Memories of Dark Shadows, founding her own publishing company, Pomegranate Press, in the process. Her company’s speciality is nonfiction books covering all aspects of the entertainment industry, which includes the latest addition to the company’s range of books about Dark Shadows, Return to Collinwood. The first 200 customers who pre-ordred this book through Pomegranate Press received the 8×10 promotional still of Maggie/Josette and Barnabas autographed by Kathryn Leigh Scott.

As if I would order it from anywhere else.

Return to Collinwood looks back on five decades of Dark Shadows, including the original series, the 1991 “revival” series, the failed attempt to re-launch the series again in 2004, and even the upcoming feature film starring Johnny Depp. It is filled with rare photographs and anecdotes from original cast members, including Jonathan Frid, David Selby, Lara Parker, and, of course, Kathryn Leigh Scott, all of whom also have cameos in the upcoming Burton-Depp film. I’m really looking forward to reading it and subsequently sharing my impressions of it with all of you.

Thank you, Kathryn Leigh Scott, for making my day. And thank you, Dark Shadows, for creating a world filled with wonderful characters and stories that has allowed me time and time again to suspend disbelief and completely disappear into another, utterly enchanting universe. I’ll never, ever betray you.

3 thoughts on “The Totally Coolest Thing Ever”