If I were into making lists (…yeah, right), Gilmore Girls would be fighting for the top spot as my favorite television show of all-time. I love Gilmore Girls. I love the fast-paced, witty dialogue, packed with pop culture references ranging from the Monkees to Il Duce to Dorothy Parker to Rob Lowe and back again, the quirky characters of the idyllic Stars Hollow, the complex relationship between Lorelai and her upper class parents, and, of course, the unbelievably close friendship between Lorelai and Rory–who also happen to be mother and daughter.

But I absolutely dread the seventh–and final–season of Gilmore Girls.

When I was an undergrad, I would watch the entire series every quarter term, averaging about a season a week. The first three seasons were easy to tear through; they’re pretty seamless. The show’s dynamic changes when Rory leaves to attend college in the fourth season and continues to change as Rory assimilates more and more to the socialite, privileged society her mother abandoned as a sixteen-year-old. But by the sixth season, the fabric of the show began to fray a little bit, and it had completely unraveled by season seven, slowing down my weekly intake of episodes. When I watched the show when it originally aired (Tuesdays at 8 on the WB/CW!), I don’t remember noticing its decaying quality, although certain moments definitely did make me cringe, but re-watching the show numerous times since (the number of times I’ve seen the show in its entirety is well into the double digits), the decline is painfully obvious.

It’s easy to attribute the atrocity that is season seven to the change of command from creator Amy Sherman-Palladino to David Rosenthal, a writer and producer under Sherman-Palladino’s reign, but maybe it’s not completely fair. Of course Sherman-Palladino’s writing and vision for the show and its characters was sorely missed in the final season, but there were still seeds planted in season six–the somewhat unbelievable plot development that Luke had an eleven-year-old daughter, the subsequent disintegration of the Luke and Lorelai relationship, Lorelai running to Christopher again–that allowed for the debacle of the seventh season. It had to be difficult for the incoming writers to pick up those pieces, try to fulfill a vision that wasn’t their own, and still stay true to the characters.

Yet it isn’t so much what happens in the seventh season that aggravates me and fills me with dread as it is the way in which it happens. Lorelai and Christopher getting married? Fine–really. But am I supposed to believe that Lorelai, who was always so adamant that “timing” was the biggest issue between her and Christopher, is just going to jump into a marriage a few months after a devastating breakup–quite possibly the worst time? Is that really true to her character? I’m not completely sold that it is. And that’s bad writing. Anna, the mother of Luke’s child, is just going to uproot her life in Connecticut to take care of her ailing mother, who evidently cannot be moved, in New Mexico? And she’s going to deny Luke any access to their daughter? Okay. More bad writing. We’re going to recycle old story lines–the Great Stink resembles Kirk’s Easter Egg disaster, Richard’s heart attack mirrors an earlier health scare, Rory’s jealousy over a dinner with Logan’s work colleagues even recalls her reaction to “hanging out” with Logan and his buddies over a poker game, to name a few–and just hope no one notices? Even more bad writing.

Life’s short, talk fast–that was the show’s original tagline. Season seven, however, is long and talks slow. There’s only a single Godfather reference. (It’s amazing how many times I watched this show without having seen The Godfather. Seeing The Godfather is truly a life-changing event, and I highly recommend it to everyone.) Not only is there less dialogue, but when the characters do talk, they don’t always say something. They seem lost, and there is a lack of substance. Every episode of the first six seasons brimmed with multiple story threads, making full use of the wonderful supporting cast, who are sparsely used throughout the final season. Ken Tucker of Entertainment Weekly dubbed the final season Gilmore Ghosts, an apt description of a show that had become a mere shadow of its former brilliance.

The final episode, “Bon Voyage,” however, alleviates some of the pain of that final, tedious season.

In “Bon Voyage,” Rory, recently graduated, accepts a job to cover the campaign of Barack Obama for an online magazine–a job which begins in just three days, canceling the town’s graduation party for Rory and forcing Lorelai to quickly adjust to the idea of not being able to see her best friend and daughter for months on end. What I love most about this episode is how it was really about the relationship between Lorelai and Rory, which had always been the focus of the show but was sometimes only the background to their romantic lives, school and work, and the fractious relationship with Lorelai’s parents. This episode was about Lorelai and Rory saying goodbye to one another; everything else was in the background. And when Lorelai jabbers incessantly (as she’s wont to do) about all the wisdom she has meant to impart to Rory, Rory responds with one of my favorite lines of the entire series, “You’ve given me everything I need.” 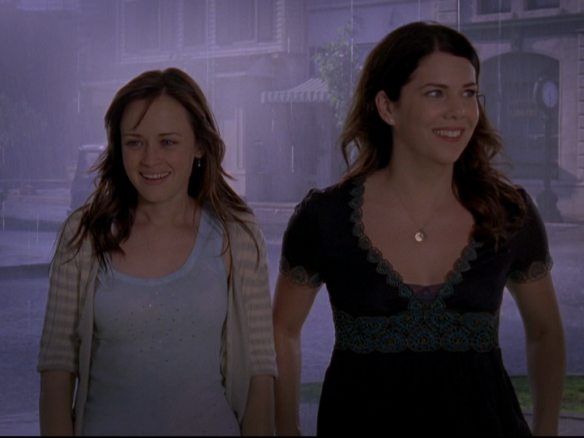 Luke, being Luke, still throws together a surprise going away party for Rory, thwarting quick departures and heavy downpours. But as Richard, Lorelai’s father rightly states, it is just a much of a party for Lorelai and a testament to her character and ability to raise Rory as she did as it is a party for Rory. It is, quite simply, a celebration of the Gilmore Girls–a fitting end to the series.

(The decision to cancel Gilmore Girls was not made until two weeks before the final episode aired, making this episode that much more amazing because it was such a perfect end to the show without fully intending to be.)

…which perfectly mirrors the final shot of the pilot episode:

As much as I hated to see the show end, even with its creative drought, this is the most fitting conclusion for the show: a shot of two best friends, a mother and daughter, talking about anything and everything over a very large cup of coffee at Luke’s Diner.

It was heartbreaking and difficult to say goodbye to the Gilmore Girls, and it remains so each time I re-watch the series. I like to imagine what the seventh season could have been like if Amy Sherman-Palladino had been able to work out a contract with the network. I wonder what possibilities an eighth season held. But really, by the end, the Gilmore Girls had already given us everything we needed.

(Plus Santa gave me the complete series on DVD for Christmas.)