Where has the time gone? There’s only 16 days until Christmas, only three days until Sinatra’s 100th birthday, and yesterday marked 35 years since John Lennon was assassinated. (It’s amazing how no matter how much time passes between hearing that man sing, there is always a comfort and a chill when I hear his voice–so real and so authentic and so very missed.) Things in my life have been very strange these past few months. A few months ago, I couldn’t wait to listen to A Jolly Christmas from Frank Sinatra, so I didn’t. Oh by gosh by golly, it was time for mistletoe and holly in October. Last night, I had no desire to watch any holiday-themed films; I just wanted to watch Love and Mercy–darn that Paul Dano if he doesn’t simply radiate the spirit of Brian Wilson so darn well, especially when he’s in the studio and so incandescently happy. It warms my heart and brings a little tear to my eye. Give that man an Oscar!

It is, however, time to indulge in the Christmas spirit and begin a series of (serious) posts about some of my favorite Christmas-related things. Up first: a critical analysis of one of the best Christmas songs and videos ever, Wham!’s “Last Christmas.”

Plot synopsis: Last Christmas, George Michael gave his heart to a girl. The very next day, she gave it away to be with…the other guy from Wham!. Yeah. Totally believable.

So we’re off to a great start when a jeep pulls up to a snowy retreat in the mountains and out jumps a waving, smiling George Michael. We meet George Michael’s former flame (the one who threw his heart away)–for the sake of simplicity, let’s refer to her from this point forward as…Sally. Friends wave each other excitedly, and George Michael strategically places his arm around his new girlfriend–with whom he has ZERO chemistry and who has ZERO personality. Just look at how dully she greets George’s friends:

“Hi, nice to meet you. I left my personality at home. Isn’t it weird how George greets a friend with more passion than he expresses toward me throughout the entire duration of this video?”

Once everyone is inside the cozy haven, it’s time to set the table for dinner and decorate the Christmas tree. George is on tinsel duty, which is a natural choice since every time he smiles, his Colgate-white teeth light up the room. There is some tension in the air as Sally watches George decorate the tree (more like watches George’s butt), and the tension continues to build until…GASP! George drops the tinsel and makes eye contact with Sally. Remember in Titanic when Old Rose reminisced about posing for the naked portrait for Jack? “It was the most erotic moment of my life…” Yeah. 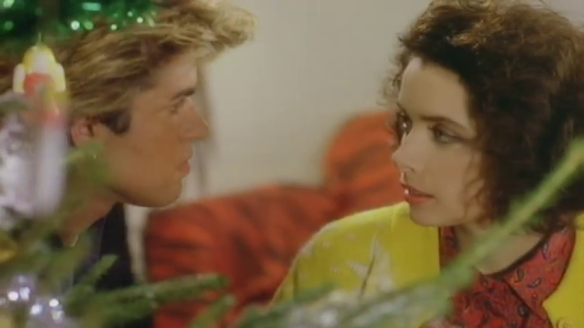 Since things were getting a little too heated inside, the gang moves outside to play in the snow. George Michael, though, plays it cool and aloof, melting the snow with his smoldering stare…

He’s apparently successful because next thing we know, the gang’s back inside, enjoying Christmas dinner. George Michael sits at one end of the table, sipping a glass of wine and attempting to engage in conversation with the people around him. (Is that his new squeeze sitting there? Hard to tell because THEY DO NOT INTERACT OR HAVE ANY CHEMISTRY!!) George and Sally’s eyes meet. Oh my gosh. What is this? 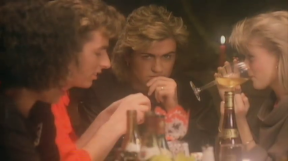 It’s time for a flashback. We see happier times–like Katie and Hubbell putting the books away in California. Sigh. George and Sally roll around in the snow…

George has just told a REALLY funny joke. How could she ever give his heart away?

We then see George, with an open shirt, give Sally THE GIFT…THE GIFT that she gives to…the other guy from Wham!? Really? Why? Are you delusional?

Cut to the gang heading up the ski lift and saying their goodbyes until they see each other again. It’s such an unhappy, unsatisfying ending. I really am struggling to grasp the fact that Sally would ditch George Michael for the other guy from Wham!–and why does George Michael have that other girl? He pays zero attention to her! It’s just like in The Way We Were. How could Hubbell leave Katie after she had the baby? She was the only one who really loved him, the only one who was going to push him to write his second novel, the only one to make him a better person, to give him a spine. George and Sally are Hubbell and Katie all over again. “Your girl is lovely, Hubbell.” Gag me! Oh, well–maybe…next year… 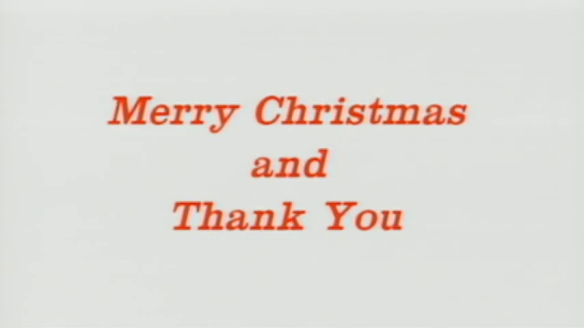