There are some days I wake up with this hankering to do absolutely nothing but stare into the turquoise jewels that are Paul Newman’s eyes. (I’m sure you do, too.)

Last Tuesday (and Wednesday…and Thursday…and Friday…) was one of those days. So I watched Harper for the first time.

Paul Newman is Harper. Harper is a private detective. Harper is very cool. Very, very cool. The epitome of cool, even. Harper is also tough and shrewd and witty, throwing out sardonic lines like, “I used to be a sheriff until I passed my literacy test.”

Lauren Bacall is Elaine Simpson, a cold, no-nonsense kind of lady who hires Harper to locate her missing husband, Ralph Sampson, whom she doesn’t really love and doesn’t really miss but would kind of like to locate because he does have one redeeming quality–wealth.

Pamela Tiffin is Miranda Sampson, flirtatious stepdaughter to Lauren Bacall. At one point, Harper remarks that Miranda will throw herself at anything “pretty in pants”–like Allan Taggert (Robert Wagner), Ralph’s private pilot. But not Albert Graves (Arthur Hill), Harper’s friend who recommended him to Mrs. Sampson for the job and who is hopelessly in love with Miranda.

Harper nicknames Taggert “Beauty” because of his pretty boy looks. Taggert likes to tag along with Harper (“This detective work is really fun”) and saves Harper from a fight one night outside a club where a piano-playin’, jazz-singin’ junkie Betty Fraley (Julie Harris) is instantly defensive at the mention of Ralph Sampson and calls the club’s security to dispose of Harper.

Fraley is close friends with a former movie star who is now an overweight alcoholic, Fay Estabrook (Shelley Winters), who is married to slime ball Dwight Troy (Robert Webber). All of these seedy characters are somehow connected to Ralph Sampson’s disappearance.

After discovering her husband’s connections to Fraley, Estabrook, and Troy, Harper reports to Mrs. Sampson that her husband keeps “as bad company as there is in L.A. And that’s as bad as there is.”

“I knew it. Oh, he loves playing the family man, but he never fooled me. Water seeks its own level, and that should leave Ralph bathing somewhere in a sewer,” Mrs. Sampson retorts.

Each of these characters could hold a clue for Harper about Sampson’s disappearance. Or perhaps some of them also hold a bullet for Harper. Each of them do work together to make Harper a great detective movie, a real whodunit that keeps you on the edge of your seat right ’til the very end. And once it reaches the end, you’ll throw your hands up in the air–quite literally–and throw a punch à la Harper at the television screen because the ending is so unexpected and infuriating and satisfying all at once.

Harper is one of Paul Newman’s most entertaining roles (originally intended for Frank Sinatra, ha!) and movies.

And it satiates the need to stare indefinitely into those ol’ blue eyes, albeit temporarily. 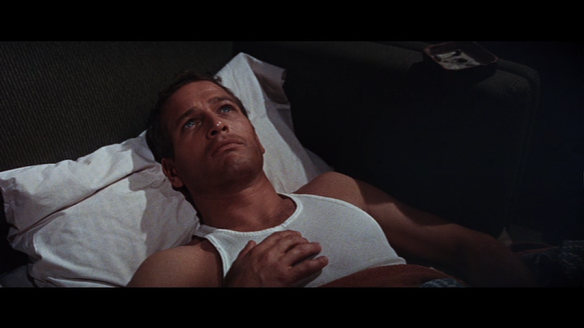 ‘Cause I’m pretty sure this will be me two weeks or two hours from now, unable and unwilling to get out of bed because all I want to do is have them turquoise jewels sear my entire being.