Whoa, a month has flown by without an update–inexcusable! Except I was exhausted, uninspired, and livin’ in the dream in Utah for a few weeks. And by livin’ the dream, I mean I was helping my grandma clean and organize, visiting cemeteries, listening to my brother rattle off our family tree back to the seventeenth century by heart (…seriously), frequenting thrift stores, and making myself stay up until 11:41 P.M. every night to watch My Three Sons. Like I said, inexcusable. Except in my book, when you have the chance to watch My Three Sons, it is inexcusable to not drop everything else and grab that chance and never let go, Jack.

Unless they’re the color episodes featuring some demon masquerading as a child named Dodie. Then you go right ahead and let go.

But we’ll talk about Dodie later. Right now let’s focus on why I felt compelled to stay up to watch this 50-year-old show, just as I felt compelled to forego sleeping in on my summer vacations as a child to sit in front of the television at 8 A.M. to watch the reruns of the black-and-white episodes on TVLand. (I was a healthy and balanced child. Promise.)

I dare you to listen to this theme song and not have it stuck in your head…forever. No, really. It will be stuck in your head forever. Because it is just that delightfully insidious. It is also known in some circles as the bomb diggity. Really.

Ain’t no estrogen ’round here… 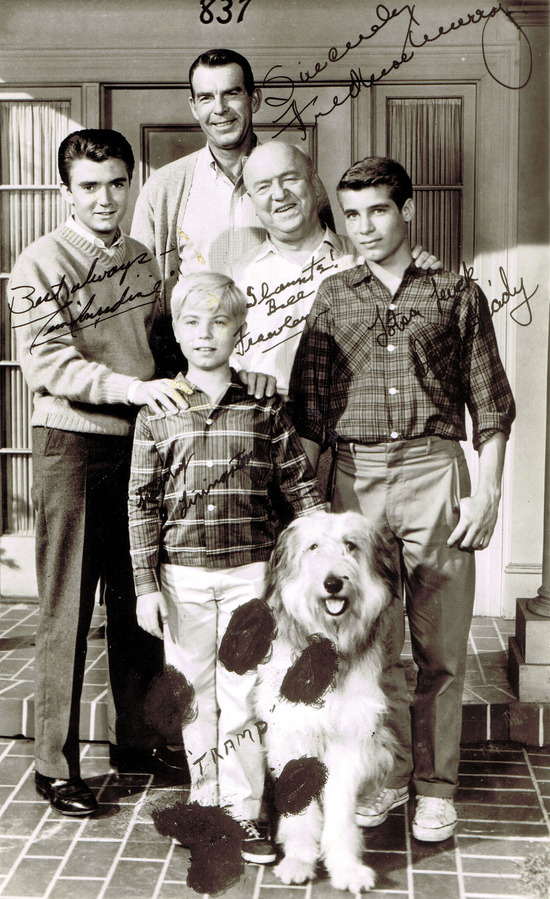 My Three Sons premiered on ABC in September 1960. Unlike some of the other sitcoms of the era, the all-male Douglas household was loud and messy. It was a more realistic portrayal of suburban life than some of its contemporaries, where children’s rooms were often in near-pristine condition. And Grandpa Bub (William Frawley) did not clean that adorable little house in Bryant Park (far superior to the North Hollywood home the family occupied in later seasons) in high heels and pearls. (Uncle Charley, on the other hand…Just kidding!) He did, however, gripe (good-naturedly) about having to repeatedly clean up after those boys and that rascal of a dog, Tramp. Oh, Tramp. No other TV dog compares to you. (And your autograph is adorable.)

Now for those of you watching in black and white… 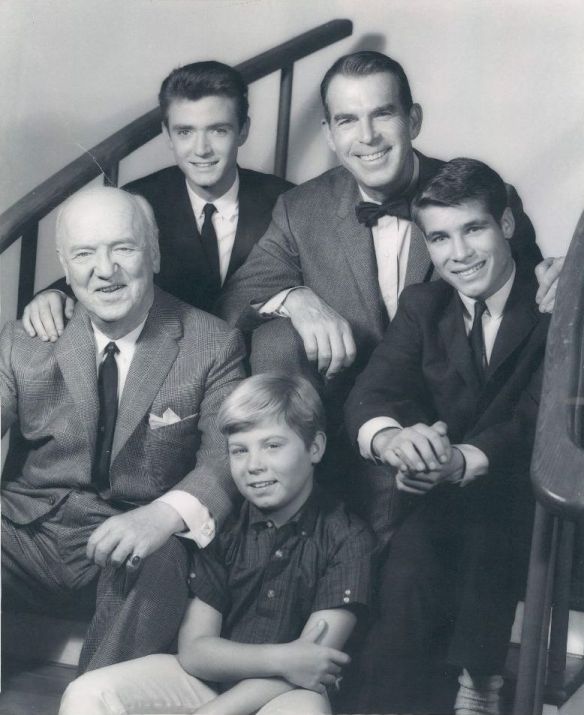 The first five seasons of My Three Sons aired on ABC in black and white. They featured William Frawley as Bub and Tim Considine as oldest brother Mike. These are undoubtedly my favorite episodes. The personalities of Mike, Robbie, and Chip blended well. Bub was an endearing curmudgeon. The love interests of widower Steve Douglas (Fred MacMurray) were minimal and short-lived. The focus instead was on his three sons, their lives and mischief, and how their Dad and Bub helped them learn and grow. Plus, there’s just something about watching a show in black and white as opposed to color that I find inherently more enjoyable.

When ABC deemed the show too costly to produce in color at the end of the fifth season, the show moved to CBS. The end of the black and white episodes also marked the departure of William Frawley, who was declared too ill to work and thus too costly to insure, and Tim Considine, whose request to be able to work behind the scenes on the show as well as act was denied. Considine’s character Mike got married, moved away, and was sadly rarely mentioned in later seasons. I wish he would have been allowed to stay. I wish it hadn’t been so expensive to insure William Frawley. But he wasn’t and it was and so instead of canceling the show outright, the show changed.

…this one is in Technicolor! 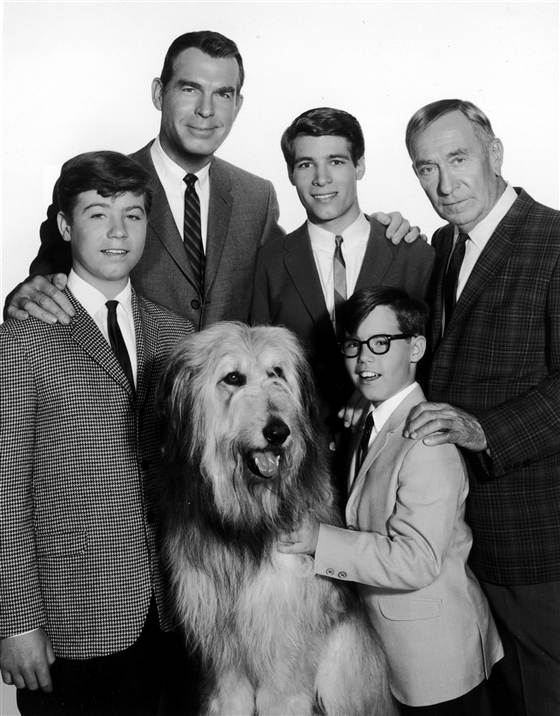 Enter Bub’s brother Uncle Charley (William Demarest) to assume Bub’s housekeeping duties and neighbor Ernie (Barry Livingston, real-life brother of Chip aka Stanley Livingston) to fill the void left by Mike and become the adopted third son, keeping the title of the show intact. Uncle Charley is just a much of an endearing curmudgeon as Bub, and Ernie assumes the duty of being the little cute one, now that Chip is entering his teen years. Steve and Uncle Charley still help the boys solve their problems. They still live in Bryant Park. The house is still messy. A few seasons later, Robbie marries a girl named Katie, and they subsequently have three sons of their own. (Take that, Bradys!) But the show is still watchable, enjoyable even.

And then the show’s creators decided that it wasn’t good enough that the three sons grew up and got married. Longtime widower Steve needed to get married, too. I guess they were possessed or something. 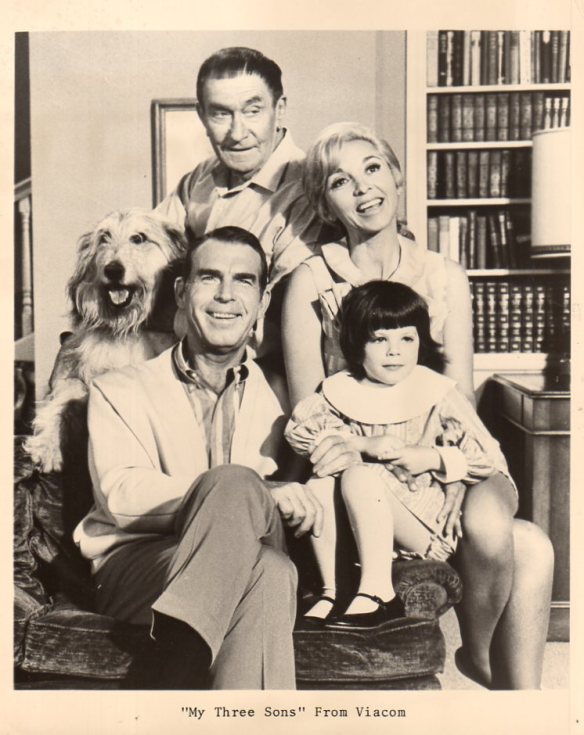 It was painful to upload that picture. If I ever run out of storage space on this blog, it is the first thing to go.

Okay, so he gets married to someone who he doesn’t even seem all that crazy about…but there has to be a kid, too? I understand that perhaps the show’s creators felt that they needed to fulfill the “cute” factor once Ernie entered puberty. But in no universe could Dodie be honestly described as “cute.” I’m sorry, but that is the truth. She wasn’t cute, but she was an annoying little brat whose dresses were inappropriately short. What were the show’s creators thinking? They weren’t, apparently.

The episodes introducing Barbara and Dodie began to air toward the end of my stay in Utah, and I found myself checking my phone often to see if the twenty-two minutes had yet come to an end. The episodes go by so slowly. The plots are threadbare and pointless. I began to make a list of things I’d rather do than watch episodes revolving around Barbara and/or Dodie. Item number one on the list: ANYTHING!!

Meanwhile, Robbie leaves for business in Peru or something. And Chip elopes. And Ernie’s voice is still cracking. And Mike…wait, who’s Mike? This is sadly no longer the same show I fell in love with. And it’s not difficult to understand why it was eventually cancelled after twelve seasons.

But My Three Sons remains one of my most-beloved shows. Steve Douglas is one of my favorite TV Dads. He was kind and fair and understanding, with a good sense of humor. I love the disorderly Douglas household. I love how they all ate at that small, circular table together, digesting Bub’s oatmeal without complaint (sometimes). I love how they bickered and fought and helped each other. I love how, corny as it may be, a lesson was learned at the end of each episode–the most recurring lesson being that this was a unique family who loved each other, muddy shoes and dirty hands and all.

Even an infuriatingly annoying little girl in a dress so short it shows her underwear couldn’t erase that lesson.